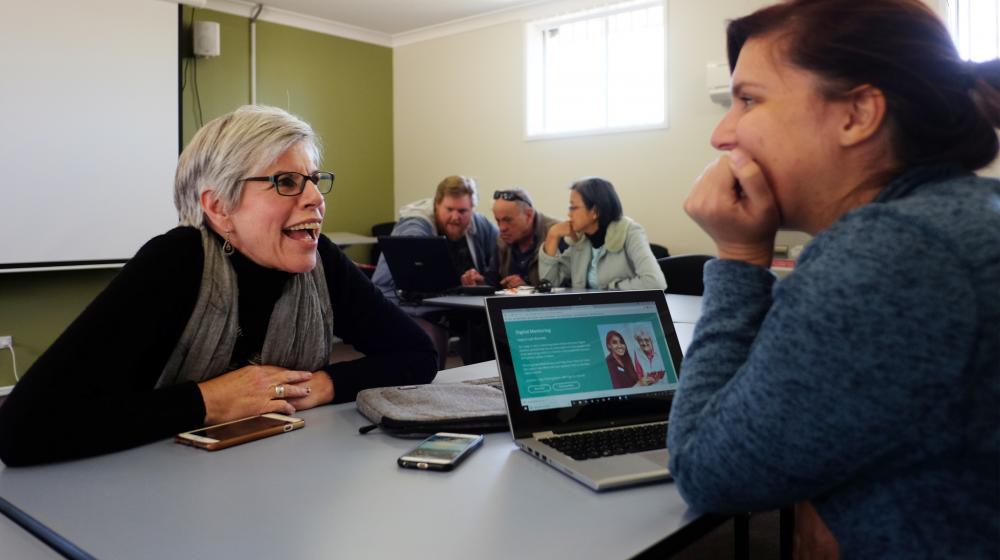 The digital learning sessions are run in the Leep in Lab and in outreach venues across the local area. Those requesting support make an appointment and then bring their own device to the session. Some of the people attending the drop-ins by appointment return more than once thus building up their confidence as well as their digital skills. In addition to delivering outreach sessions, Leep also partners with other organisations to help them develop and deliver their own digital mentoring programmes. One of the volunteer mentors on the Leep programme is now Project Assistant for Digital Inclusion.

Metro Community Hub, based in Woolloongabba, Brisbane, supports older people aged 50+ to maintain their independence, and stay connected to their community. One of the activities they offer is free one-to-one IT tutoring with a volunteer or attendance at a weekly group session. Participants can use the Hub’s computers or bring their own device.

The NPO Broadband School Association is based in a community centre in Kanagawa, Tokyo. Their model, for older people, is drop-in by appointment on a specific morning of the week. Those seeking support bring their own device and receive 30 minutes of one-to-one support from a volunteer. The drop-in receives referrals from the local mobile phone shop which can make an appointment for their older customers seeking additional help on how to work their smartphones. The phone shop also provides a member of staff for the drop-in to offer additional support to the volunteers and their clients. I, too, availed of the support offered at the drop-in. One of the volunteers taught me how to download, install and use VoiceTra which is a language translation app.

In addition to providing a drop-in for older people to learn to use their digital devices, NPO Broadband School Association also runs after-school workshops for children to learn to code. The coding is taught by older volunteers including Mrs Masako Wakamiya who, in her eighties, is thought to be the world’s oldest coder. Mrs Wakamiya developed a game called Hinadan for older Japanese people which can be downloaded from the Apple store. She told me she was motivated to develop it because she couldn’t find a game that was of interest to her age group.

Digital Terakoya is an initiative where people from the local community can learn digital skills and is part of a pilot, called Community ICT Club, supported by the Ministry of Internal Affairs and Communications. The NPO Broadband School Association, which is one of a number of organisations involved in the initiative, provides the tutors for an afterschool basic coding workshop, Granny’s Programming School.  All of the tutors, including Mrs Masako Wakamiya, are aged 60+. The workshops are aimed at children, their parents and older people. The workshop I attended was relaxed and fun with two older people showing a small group of school aged children how to programme indicator lights. What impressed me was that it turned every stereotype on its head, with those aged 60+, including older women, both leading and teaching the coding.

Based in Uji, a small city close to Kyoto in Japan, NPO Machizukuri Net, offers a drop-in to older people in the local community. The organisation opened in 2008 and over the 10 years has seen a shift from older people wanting to learn to use PC computers to tablets and smartphones.

When I visited it was a monthly drop-in by appointment or simply turn up on the day. The group had hopes to run the drop-in more frequently. One older man that I spoke to, told me he was keen to learn to use LINE so that he could stay in touch with family members.  LINE is a freeware app, similar to WhatsApp, enabling the user to exchange texts, images, video and audio, and conduct free VoIP conversations from their digital devices such as smartphones. It is widely used in Japan. Another man, aged 90 years, was organising a school reunion and was receiving support from one of the volunteers who was helping him to design an invitation.

Volunteers who helped to run the digital sessions were accredited Senior Information Life Advisers, trained by the New Media Association.

Inter-Depending Network (IDN) is based in a beautiful old school building, Yotsuya Hiroba in Shinjuku-ku. When the school shut, due to a declining school aged population, the building was renovated and strengthened to withstand earthquakes before being handed over to the local community. It is now managed by a Steering Group, comprising representatives from different community groups.  IDN runs various computer classes for older people, again delivered by Senior Information Life Advisers, adapting the content to meet the changing needs of those aged 65+. For example, they have found that recent retirees are more likely to have used a computer while working than those retiring 10 years ago. Smartphone classes have therefore become more popular and IDN has partnered various telecommunication companies such as DoCoMo to deliver courses and workshops. Schemes such as course participants being able to borrow a device for the duration of the course have proved very successful. IDN also offers courses to enable older people to achieve the Senior Information Life Adviser certification, e.g. Smartphone Tablet Master training.